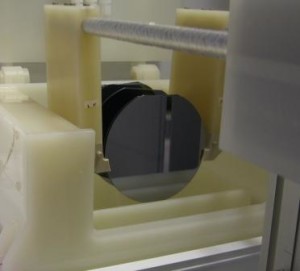 The yield of a silicon wafer is inversely related to the defect density (cleanliness and particle count) from the processing done on the wafer. One way to reduce defect density and increase yields is to use efficient wafer cleaning processes that remove particle contaminants efficiently. With smaller semiconductor devices and geometries the removal of smaller particles from silicon wafers has become more critical. Small particles can be difficult to remove since strong electrostatic forces exist between the particles and the wafer substrate.

The chemistry used in standard wafer cleaning has remained largely unchanged during the last 30 years. It is based on the use of the RCA clean process that utilizes acidic hydrogen peroxide and ammonium hydroxide solutions. While this is the primary method still used by industry, what has changed recently is its implementation along with new optimized cleaning technology that includes ozone cleaning and megasonic cleaning systems.

Manufacturing integrated circuits requires hundreds of precise processing steps depending on the specific device type. Most of the steps are completed as single processes on the complete wafer before they are diced into individual chips. About 20% of the steps are wafer cleaning processes, which highlights the importance of wafer cleaning and substrate surface conditioning.

The RCA clean process was originally developed by RCA Corporation and is a cleaning method to remove organic residue from silicon wafers. The cleaning solution is made up of 5 parts water, 1 part 30% hydrogen peroxide, and 1 part 27% ammonium hydroxide. It is an effective way to remove organic contaminants and leaves a thin layer of oxidized silicon on the surface of the wafer.

The RCA cleaning process can be carried out in two steps called SC1 and SC2. SC1 clean process uses the APM solution (ammonia hydroxide-hydrogen peroxide water mixture) of the RCA cleaning method which removes organic matter and particles. This treatment forms a thin silicon dioxide layer on the wafer surface with some metallic contamination that will be removed in subsequent steps. The SC2 cleaning method uses a solution that is typically made up of 6 parts deionized water, 1 part hydrochloric acid and 1 part hydrogen peroxide or HPM (hydrochloric/peroxide mixture). This step effectively removes remaining traces of metallic (ionic) contaminants some of which were introduced in the SC1 cleaning step. In addition it leaves a thin passivation layer on the wafer surface that protects it from subsequent contamination. These two steps prepare the silicon wafer for further processing.

Piranha etch is a popular process for cleaning silicon wafers, but it must be tightly controlled to be effective. Piranha etch clean, also known as Piranha solution, is used to remove large amounts of organic residues from wafer substrates. It effectively removes photoresist and other hard to remove organic materials. The typical mixture ratio is 3 parts of sulfuric acid and 1 part of 30 percent hydrogen peroxide. Other protocols use higher sulfuric acid ratios of 4 to 1 or as high as 7 to 1. Since the mixture is a strong oxidizing agent, it not only removes most organic matter, it will also hydroxylate most surfaces and make them hydrophilic (water-compatible). The mixture is highly corrosive and must be prepared and handled with special care. The piranha etch process can be done in heated quartz tanks where both temperature and chemical concentration affect the etch rate. Modutek provides a process control strategy that delivers improved results, for more details refer to the article “Improving Piranha Etch process results in silicon wafer cleaning“.

Pre-diffusion cleans are critical steps during the wafer manufacturing process. They are done several times during the manufacturing sequence and require a significant amount of equipment capacity. They are done as the final step before the silicon wafer goes through a diffusion furnace operation. Particle and metallic contamination must be minimized and etch uniformity must be optimized while high throughput in maintained.

Depending on the nature of the contaminant, a variety of aggressive chemicals, including those from the cleaning methods mentioned above, may be used to achieve clean surfaces. Pre-diffusion cleaning is a critical process because particles or contaminants on the wafer surface are likely to be driven into the wafer as well, causing unpredictable electrical properties that result in defective or low-quality semiconductor output. Wafer manufacturing facilities and research centers require stringent contamination control protocols and use various methods for cleaning wafers. These methods include mechanical and wet chemical baths in combination with the use of high frequency megasonic cleaning equipment.

Megasonic wafer cleaning involves using various complex mechanisms that include mechanical vibration and cavitation within a cleaning tank. Megasonic cleaning does not require the use of expensive chemicals and simultaneously removals of both contaminant films and submicron particles. The Ozone cleaning process can clean or strip wafers faster and more cost-effectively than traditional cleaning processes. Modutek’s proprietary Advanced Ozone Cleaning Process does not require the use of expensive chemicals and improves process performance while reducing environmentally harmful waste. The process uses DI water in Modutek’s DryZone gradient dryer to clean wafer substrates to eliminate inorganic impurities before exposing them in an ozone chamber. All traces of organic materials are converted to carbon dioxide. The resulting substrate surfaces are free from particles, trace organic materials and moisture with a stable hydrophilic surface.

Consultation and Equipment Support from Modutek

Modutek can evaluate the needs of any wafer manufacturing facility or research center and offer appropriate recommendations on improving their processes. If you want a free consultation or quote on using Modutek’s equipment to improve your wafer cleaning process and manufacturing yields, call Modutek or email [email protected].

One thought on “Wafer Cleaning Process”